Catmando, one of our 2021 Trail Team members, is preparing for his SOBO Pacific Crest Trail trek by shaking down on the Long Trail (and also on the Benton MacKaye Trail which you can read about here). Below, Catmando gives us a run-down of each day on trail, and what to expect if you want to hike it yourself in the future:

The Long Trail of Vermont is rated one of the hardest trails on the east coast and it is the oldest trail in the country, it was started in 1910 and finished in 1929. It is 271 miles long, starting in the south in Massachusetts and ending on the Canadian border of Quebec. It is congruent with the AT till Rutland, Vermont for roughly 100 miles. Maine junction is where the LT continues north and the AT veers off to the east concluding at Kathadin – close to the town of Millinocket. I essentially hiked this trail in three sections and by far my favorite section was the last 87 miles south from Canada. The trail was steep, challenging and demanding. The views were spectacular! The time period I hiked it (May 15-22) was a complete anomaly, no rain, no snow, no cold, no mud, no bugs! Water was a touch scarce and the solitude made my hike even better. There are literally miles of moose sign, tracks, poop, but not once did I see a moose!

Our friend, Kathy Duchesne and my wife Denise drove me to North Troy, Vermont- some 4 hours from where we last lived in New York. The day was perfect, clear and about 70 degrees. Off in the distance of the Green Mountains- loomed the summit lodge of Jay Peak, I clearly remarked – yup – I’ll be on top of that real soon! Though the first two sections I hiked NOBO, I chose the SOBO path because I thought it would be similar to the PCT in the fact that once I reached Canada I’d head south and I would likely not encounter many LT hikers, so the solitude would be another test. The AT provided me with barely any solitude, I went 5 hours as my longest period without seeing a hiker and my tramily was so supportive that we challenged and motivated each other. How would I push myself and how would I like the solitude were questions in the back of my mind?

Once I got dropped off, I signed the register and checked for previous hikers, the closest one was ten days earlier going south and none had completed their NOBO yet. The first day I hiked the 1.3 miles to the northern/ Canadian terminus. I touched the boundary marker and set off covering another 8.3 miles to my first camp, Laura Woodward shelter. The woods were full on spring with a botanical display of ephemerals: burgundy trilliums, bluets, claytonia, dutchman’s britches, trout lilies galore, viburnum with Solomon’s seal and Clintonias’ also ready to bloom too. That night I had a fitful sleep and after a short serenade of owls I drifted off knowing I had some serious work in the morning! That came in almost immediately with a 3,100’ ascent of Jay Peak, the west side had drifts of snow 2-3’ deep in places where I needed to posthole previous hikers boot tracks. The descent was even greater at 3,600’. It was magical on top and looking north was Canada and south would be my greatest work yet to do – Mount Mansfield, the tallest in Vermont, prominently dominating the Green Mountains! Jay Peak was epic, the hard climb reinforced my belief that every breath-taking view would never come easy and because of that I appreciate it even more! Climbing up one of the ski trails I dug a Boston Redsox hat out the snow and attached it to my pack, I did that to honor Neko our new baby Boston terrier! The day concluded at Hazen shelter at 18.8 miles. The one and only other hiker I encountered was there that night. Around 10:30 PM or so, my bladder woke me up to a nature call, I slipped my runners on my feet and walked out of the shelter in my underwear to see a red light bouncing my way, I called out and James said he was on his way to the shelter. We spoke briefly before sleep overtook us both, he was NOBO and anxious to finish. He told me he was stopping to get a few hours sleep and then off to Canada. He didn’t even take off his boots, he curled up on a wooden bunk and fell asleep. Before he drifted off, I wished him well and congratulated him, because I planned to sleep in to 7 or so! In the morning he was gone!

Day 3, I stretched my legs and hiked 15 miles gaining and losing over 9,300’ and it felt great after a hard day hiking, I ended up at the nicest shelter I ever stayed in! Spruce ledge camp was four walls, sliding front doors, inside bunks, shelving and tables. There was a pavilion with a picnic table, clean privy and a bench with a commanding view of Devils gulch that I climbed through to get to spruce ledge, the gulch reminded me of a mini Mahoosuc notch. The only negative was the water source was 3/10ths of a mile back down the ledge! The highlight of the day was a fire tower on top of Mt Belvidere and meeting an older gentleman day hiker that hiked the AT in 1974, and has lashed parts of both the PCT and CDT. Great guy, wonderful conversation, his trail name was Gus or Woodrow, it would change based on what Lonesome Dove character he was on a particular day!

Day 4 was another 15-mile stretch, I spotted my first Vermont black bear, he smelled me at about the same time I started to video him, he was about 250 pounds and never once questioned his nose, as he barreled down a hill away from me! I ended up at Roundtop shelter. At this point, since the beginning of this hike, the weather has been perfect, warming up more each day and by now it was mid-eighties while back in Florida it was in the seventies. The mud was non-existent, so were the black flies and mosquitoes!! My numbers were good but not as ambitious as the day before, my ascents and descents tallied 8,570’ for the day!

Day 5 was a planned nero, 4.1 miles had me close to the 50 mile mark and I reached route 15 and planned to hitch into Jeffersonville. Every hike, it seems no matter the duration, I encounter serendipity and am reinforced with the reality that the trail provides! On day 2, my Evernew water bag basically exploded, rendering it useless. I had 2 Smart water bottles, so I would need to designate one for dirty water. On the first summit of the day, raggedly breathing as I maneuvered up a steep pass, my eye fixed on a rock that was my immediate goal and perfect resting spot. I plopped down on that rock and much to my surprise the trail not only provided a great seat where I needed it, but a perfectly good water bottle behind it! I found a thumb tack at the next shelter, poked a hole in the bottom of the water bottle and I had a perfect vessel for my purification system! If that wasn’t magic enough, while trying to thumb my ride, I gravitated toward the hardware store because it looked like a potential ride would have an easier pull off. I noticed a “Patagonia “ sign, I had to go in! They had an amazing selection of hiking gear, so I replaced my spent Evernew and upgraded to a larger C-noc bag!

Finally securing a ride, my “driver” steered me solid to the Citgo gas station and deli where I consumed coffee, several chocolate milks and a nice egg, cheese and bacon breakfast sandwich! My plan was for my buddy Steve to pick me up and spend the evening with him and Christina. I did a quick dollar store run for resupply and some laundry and then we spent the afternoon and evening catching up at their beautiful home! It was so great to see them and catch up. I love talking hiking and folks who don’t thru hike, have so many questions! Where do you get water, how much food do you carry, how much does your pack weigh? I love it, it’s great to share trail experiences, logistics, navigation, etc.. The view from their house is the entirety of Mount Mansfield, watching the sunrise the next morning knowing I’d be there in a couple days still amazes me!

Day 6, Steve dropped me off back at the trailhead I hitched from. I had a serious climb ahead and high eighty temperatures coming up! It was nearly 8-mile ascent to the summit of Smugglers Notch and I decided to go past the camping area and stay at the top of the notch warming hut! I finished the day with a 10.2 mile hike and 6.300’ ascent and descent. I weaved in and out of the snow on the slopes. I had a commanding view of Stowe and Mount Mansfield.

Day 7, I awoke to what I figured would be the hardest day of all, not deterred but inspired by my challenge, I was on trail by 6:15 am and raring to go! It was an unforgettable day, climbing Stowe, descending Stowe and climbing Mount Mansfield. Mansfield is the tallest Green Mountain coming in at 4,393’. The day was crystal clear and mid-eighties in temperature, incredulously – I had the entire mountain to myself!! By days end, I ascended and descended another 9,300’ in 13.2 miles. It was an amazing day to be a hiker and Mansfield was every bit as challenging as Kathadin with rock scrambles and shear drop offs. I stowed my trekking poles two thirds of the way up because I needed my hands and feet to advance up the granite faced slopes and rock scrambles! Once on top of Mansfield I called Denise and my buddy Mav”Eric”K to let them know I summitted! I also adjusted my pickup time with Denise for the next day.

Day 8, I arose refreshed and excited to complete this trail, I had only 13.1 miles to go and 7,700’ to ascend and descend, fortunately my ascent was all up front and it would be a nearly 7 mile descent. Bagging my last peak – Bolton Mountain at 3,725’ it was literally all down hill from here! I came out of the woods onto a blacktop road to see my wife and friends driving up the road! What timing! I had about ½ mile to go to the suspension bridge over the Winooski River. They parked in a lot by the river I kissed my bride and team Catmando (Mark & Kathy) walked with me over the suspension bridge to get a completion picture!

The Green Mountain Club (GMC) did a superb job maintaining this trail and the shelters, the trail is a gem and having completed it, I can feel accomplished by hiking the entire length and width of Vermont and summiting every 4K peak! Thanks, Vermont, for the amazing memories! This experience boosted my confidence in my knee that I strained last summer, my subtle equipment changes and my questions of solitude and motivation heading to the PCT. My thoughts of solitude and self-motivation turned out to be silly notions. I really enjoyed the solitude and my internal hard drive easily motivated me and I enjoyed challenging myself with hard miles day. I think I stumbled onto something by doing these relative shorter hikes as prep for the big ones. I think the remainder of the BMT will fill in for the Arizona trail and maybe the CDT??

What an amazing journey! 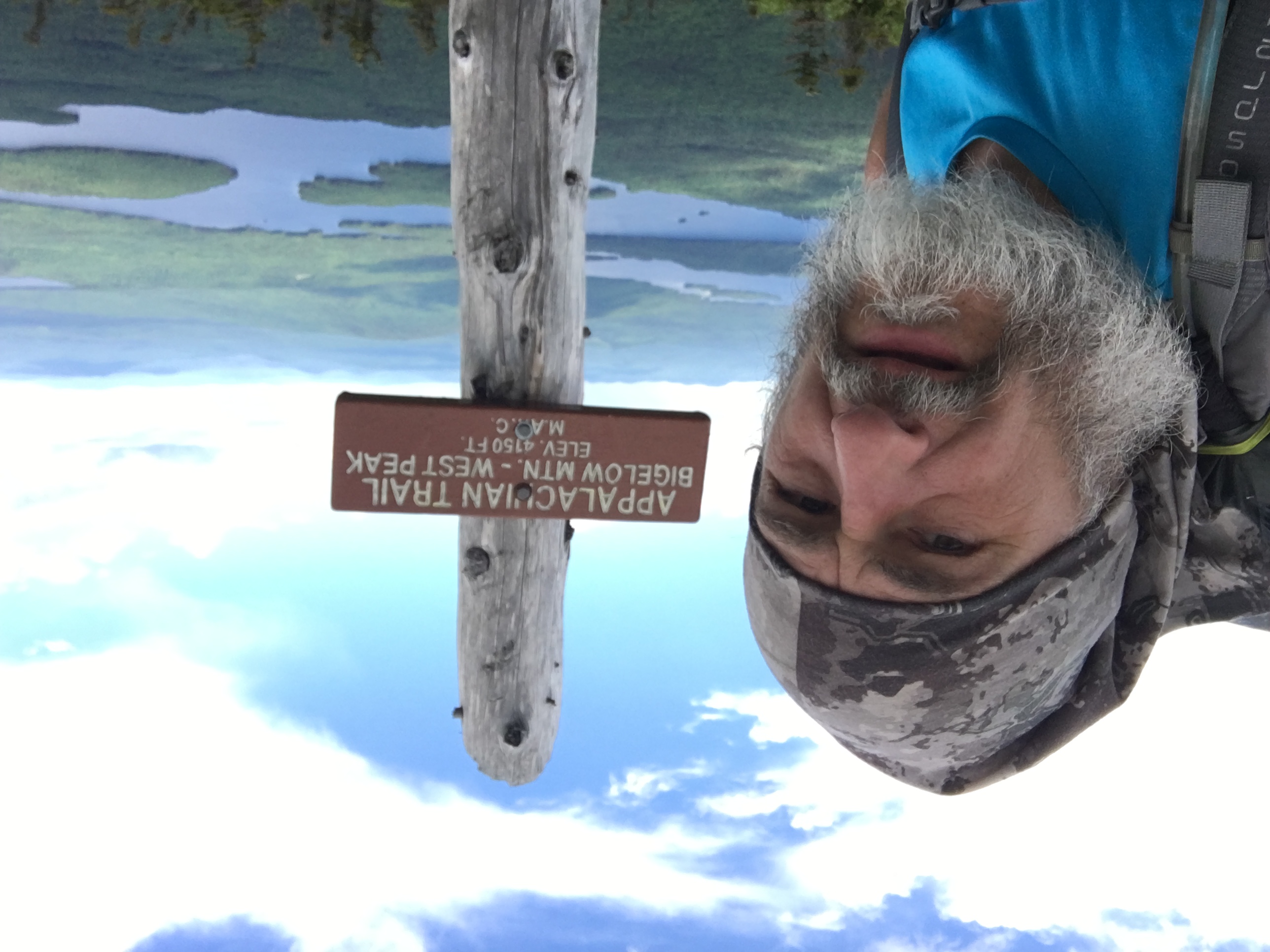 You can follow Catmando’s adventures on his ,Instagram and he is also hiking to benefit an amazing cause called ,Old Glory Service Dogs.